During my recent participation at the European Council of International Schools (ECIS), I did a presentation on Wow! Adding Pizzazz to Teaching and Learning and decided I should pass on some of the new examples folks have been sharing with me. A principal at West Long Branch Schools in New Jersey shared the following social studies example: 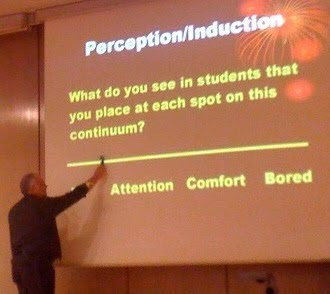 Several days before the wow lesson, the teacher placed a large empty box in the front of the room. A few days passing it no longer drew any student attention. Then, in the opening moments of the period, noise from the box was followed by Henry Box Brown emerging (actually a colleague of the teacher) who went on to tell his personal story to a startled, attentive class.

Henry Box Brown was born a slave in 1816 in Louisa County, Virginia and lived there for thirty-three years. After a childhood of relative ease, he was bequeathed to his master’s son, who sent him to work in his tobacco factory under the authority of an unfair, hypocritical overseer. Brown was not content to be a slave and decided to escape. He had himself sealed in a small wooden box and shipped to friends and freedom in Philadelphia. Click here for more on Henry Box Brown.

Principals have to WOW teachers from time to time so the principal from West Long Branch NJ shared this example:

The faculty entered a meeting finding the video of the March of the Penguins playing on the screen as they got their coffee and snacks. When everyone was gathered and watching the video and commenting in walked two live penguins followed by a zoo specialist who gave the teachers a short lesson on penguins emphasizing how they cope with the changing conditions of their environment.

As the lesson ended and the penguins exited, the principal started his presentation to very attentive teachers on changes that would be impacting the school and their students.

At the ECIS conference I met Sandy Kish who teaches at the American International School in Budapest. He got student attention for an economics lesson using pizza stools that prevent the box lid from touching the pizza.

Sandy went on to describe the value of the invention of the little stool… how it impacted the delivery business… the jobs created. He wished for students that they might find/invent that kind of key of economic impact. The stool becomes a sign of value in his classroom and from time to time he recognized students hard work or success by awarding them a pizza stool.

His students who often travel extensively for sports began collecting different types of pizza stools so that Mr. Kish now has a first class collection.

As students prepared to graduate, they wowed Mr Kish with 4500 pizza stools strategically placed in his car. See the video below which played at graduation.