Getting Students to Grapple

A team from Greene County, GA shared their list first and their opening statement was “grappling.” 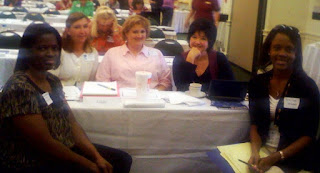 I love the word and as I questioned them to explain further they suggested that students grappling would mean they were, “exploring, asking questions, having student led conversations, asking ‘what ifs’ and doing several ’start overs’”.

My previous word to describe these actions was struggling. I think I like grappling better.

A quick online searchfor a definition of grapple found the following:

1. to hold or make fast to something, as with a grapple.
2. to use a grapple.
3. to seize another, or each other, in a firm grip, as in wrestling; clinch.
4. to engage in a struggle or close encounter (usually fol. by with ): He was grappling with a boy twice his size.
5. to try to overcome or deal (usually fol. by with ): to grapple with a problem.

In the September 2010 issue of Educational Leadership titled Meaningful Work, Carol Dweck writes about fostering a growth mindset for ability rather than a fixed mindset. (I examined this in an earlier blog.) Her article, Even Geniuses Work Hard, (pg16) states, “meaningful work can also teach students to love challenges, to enjoy effort, to be resilient, and to value their own improvement.” Sounds like grappling!

What kind of tasks can teachers provide that encourage grappling? In Newsweek’s recent exploration on creativity , they described a public middle school in Akron, Ohio where teachers came up with a project for the fifth graders: Figure out how to reduce the noise in the library. Its windows faced a public space and, even when closed, let through too much noise. The students had four weeks to design proposals.

How’s this for grappling?:

“Working in small teams, the fifth graders first engaged in what creativity theorist Donald Treffinger describes as fact-finding. How does sound travel through materials? What materials reduce noise the most? Then, problem-finding—anticipating all potential pitfalls so their designs are more likely to work. Next, idea-finding: generate as many ideas as possible. Drapes, plants, or large kites hung from the ceiling would all baffle sound. Or, instead of reducing the sound, maybe mask it by playing the sound of a gentle waterfall? A proposal for double-paned glass evolved into an idea to fill the space between panes with water. Next, solution-finding: which ideas were the most effective, cheapest, and aesthetically pleasing? Fiberglass absorbed sound the best but wouldn’t be safe. Would an aquarium with fish be easier than water-filled panes?Then teams developed a plan of action. They built scale models and chose fabric samples. They realized they’d need to persuade a janitor to care for the plants and fish during vacation. Teams persuaded others to support them—sometimes so well, teams decided to combine projects. Finally, they presented designs to teachers, parents, and Jim West, inventor of the electric microphone.”

How often do you find your students grappling?

2 Responses to “ Getting Students to Grapple ”