Design and Facilitation for Learning

Teaching teams, coaches, and professional learning communities can enhance student learning by exploring the design of learning activities and the most appropriate facilitation for those activities. 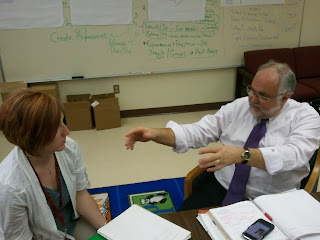 I was working with elementary grade level teams who were examining their student’s performance in math and planning backwards to develop teaching plans. Teachers decided that students needed increased opportunities to problem solve…think with math…rather than solving math problems. Upper grade teachers reported students’ glee to see a page of math problems rather than the dreaded word problem.

Many teachers, as they explained their approaches to teaching particular concepts, mentioned teaching key words, clues, and tricks.

If it says “in all” ….Add.
If it says “left”…Subtract
Start with the bigger number…

This approach comes from teachers instructing and guiding more than designing work and facilitating.

My conclusion from our work was that teachers needed increased time to design (a form of problem solving) and that for many working with colleagues was a necessity. A look at their text materials showed too few good problems for solving.

A kindergarten text had this problem:

Harry had 14 hats. He has 9 left. How many did he give away?
14 hats drawn on the page were there for the students to use.

We redesigned so that students had some problems that read:

These changes allowed teachers to engage students in more math thinking, talking and uncovering strategies for solving a problem.

A fourth grade teacher shared that she had given problems to solve to students in cooperative groups of 4 with a higher and lower performing student in each group. Her observation was that the lower level students did little thinking about the problem.

Another was to pair a high and low student together as partners and when assigning tasks, identify that the lower level student would be the one responsible for presenting the explanation of the pair’s solution. This design requires the lower performing student to seek understanding and places the higher student into a coaching role.

In order for teachers to build strong learning designs, they must first be able to identify the learning behaviors that will most likely create the student achievement. Then, design to get those behaviors. This is often much more complex and demanding work/thinking on the teacher’s part than is preparing a “teaching” lesson plan.

School leaders and coaches may need to initially facilitate these conversations and then create the time and expectations that teachers collaborate on learning designs.

2 Responses to “ Design and Facilitation for Learning ”